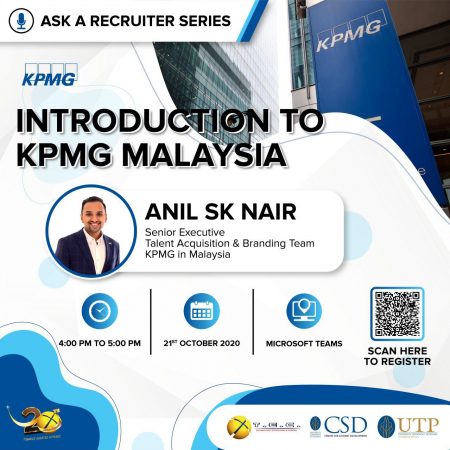 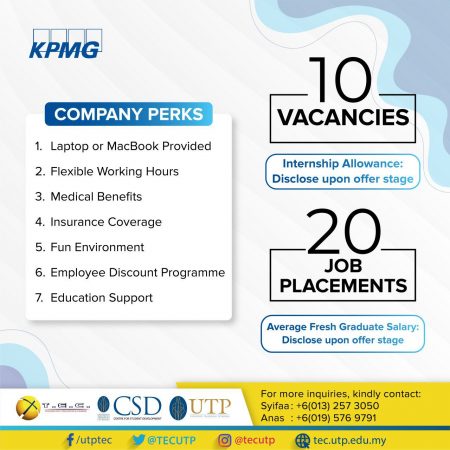 The “Introduction to KPMG” webinar was aimed to help future interns and fresh graduates to know more about what KPMG is all about. About 80 people took part in this golden opportunity that was given by KPMG Malaysia’s Talent Engagement Lead itself, Mr. Anil Sk Nair.

The speaker explained about the perks on being a part of the KPMG family which makes them an outstanding firm. Mr. Anil shared that even though the hiring process involved several intense stages to recruit talented individuals to join the firm, the team also wanted to ensure that the selected applicants enjoyed their journey as well. He also explained about the signature programs that KPMG has to offer. The organized programs are made to cover a various aspects of one’s career pathway, such as the KPMG Ambassadorship Program, ECO Dive Program, Advisory Ace and many more.

The participants were able to brush up their interpersonal skills in order to be job-ready, as well as learned about how to stand out amongst a sea of talents as the speaker, Mr. Anil shared several criteria that a candidate is required to portray in front of the panel during their interview session. The criteria involve being an all-rounder, having their own unique identity that distinct them from the others and most importantly, becoming a team player.

Mr. Anil explained that at KPMG, the values that they stand for which are Integrity, Excellence, Courage, Together and For Better, acts as a guidance in performing their daily working tasks. He added that the working culture at KPMG makes him enjoy his work on a day to day basis. Apart from having flexible working arrangements, KPMG also offers discounts at One Utama Shopping Mall for fellow KPMG-ians.

For more information about KPMG, you may visit them on Instagram at @kpmgmalaysia or their website at http://kpmg.com.my.