Navigating Your Career Path In The Science And Technology Field

by Leave A Nest and ACSL 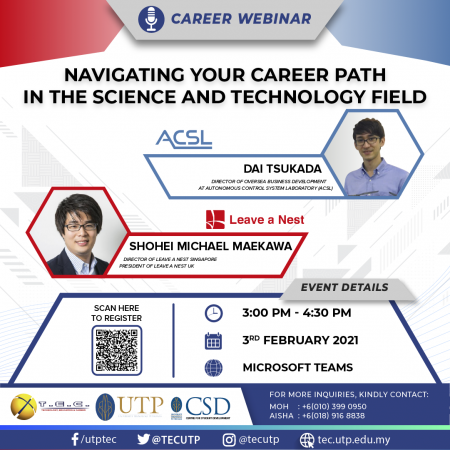 The mission of Leave a Nest is to allow scientists and artists to collaborate and solve industrial problems. Ms Ida introduced her research project about drone applications in the Malaysian construction industry during her studies. Leave a Nest is a family of agriculture experts, life scientists, engineers, mathematicians, and many other professions that strive for global happiness.

Leave a Nest was first established due to three main challenges faced by Japan 19 years ago which were the children of Japan were less exposed to science, an increasing unemployment rate of PhD students and also the lack of flow of technology into society. Besides that, they are still in progress trying to narrow the gap between researchers and the society by acting as  Science Bridge Communicators. Mr Zaim explained that Science Bridge Communicators are people responsible to meet various people and to create their own projects based on their passion.

Mr Dai from ACSL Japan, majoring in aerospace engineering, explained that ACSL is a drone start-up company that provides solutions for automation industries by using autonomous technology. Robotics technology can also solve social problems such as robotic process automation (RPA) for labour population decline, inspection robots for aging infrastructures, auto-delivery for increasing logistics flow and many more. This technology has  its benefits because of its accessibility in almost all areas, indoors and outdoors. ACSL has been developing unique drone technology such as the pipe inspection drone and the smoke inspection drone.  Mr Dai also reminded the attendees to define their work goal. Be conventional and be informed by the updates of latest technology. ACSL is currently recruiting hardware engineers, software engineers and drone pilot employees and interns.

Mr Maekawa who does research in zoology and human evolution and behaviour lead the workshop where participants brainstormed their hobbies and issues that concern them which could possibly be solved by using drone technology.

For more information about Leave a Nest, you may visit their Facebook page, LinkedIn page, YouTube channel or even directly contact Mr Dai Tsukada at tsukada@acsl.co.jp. If you are looking for career opportunities with Leave A Nest, you may submit your application to info-asia@lne.st.